The sparse evidence for a Pleistocene human occupation of present day Cambodia are quartz and quartzite pebble tools found in terraces along Mekong River, in Stung Treng and Kratié provinces, and in Kampot Province, but their dating is not reliable.
Some slight archaeological evidence shows communities of hunter-gatherers inhabited Cambodia during Holocene: the most ancient Cambodian archeological site is considered to be the cave of Laang Spean, in Battambang Province, which belongs to the so-called Hoabinhian period. Excavations in its lower layers produced a series of radiocarbon dates as of 6000 BC.
Upper layers in the same site gave evidence of transition to Neolithic, containing the earliest dated earthenware ceramics in Cambodia
Archeological records for the period between Holocene and Iron Age remain equally limited. Other prehistoric sites of somewhat uncertain date are Samrong Sen (not far from ancient capital of Oudong), where first investigations started just in 1877, and Phum Snay, in the northern province of Banteay Meanchey. Prehistoric artifacts are often found during mining activities in Ratanakiri.
The most outstanding prehistoric evidence in Cambodia however are probably "circular earthworks", discovered in the red soils near Memot and in adjacent region of Vietnam as of the end of the 1950s. Their function and age are still debated, but some of them possibly date from 2nd millennium BC at least.
A pivotal event in Cambodian prehistory was the slow penetration of the first rice farmers from North, which begun in the late 3rd millennium BC. They probably spoke ancestral Mon-Khmer.
Iron was worked by about 500 BC. The most part of evidence come from Khorat Plateau, Thai country nowadays. In Cambodia some Iron Age settlement were found beneath Angkorian temples, like Baksei Chamkrong, others were circular earthworks, like Lovea, a few kilometers north-west of Angkor. Burials, much richer, testify improvement of food availability and trade (even on long distances: in the 4th century BC trade relations with India were already opened) and the existence of a social structure and labor organization.

During the 3rd, 4th, and 5th centuries, the Indianised states of Funan and Chenla coalesced in what is now present-day Cambodia and southwestern Vietnam. These states are assumed by most scholars to have been Khmer. For more than 2,000 years, Cambodia absorbed influences from India and China passing them on to other Southeast Asian civilisations that are now Thailand, Vietnam, and Laos. The Khmer Empire flourished in the area from the 9th to the 13th century. Around the 13th century, Theravada Buddhism was introduced to the area through monks from Sri Lanka.
From then on Theravada Buddhism grew and eventually became the most popular religion. The Khmer Empire declined yet remained powerful in the region until the 15th century. The empire's centre of power was Angkor, where a series of capitals was constructed during the empire's zenith. Angkor could have supported a population of up to one million people. Angkor, the world's largest pre-industrial settlement complex, and Angkor Wat, the most famous and best-preserved religious temple at the site, are reminders of Cambodia's past as a major regional power. 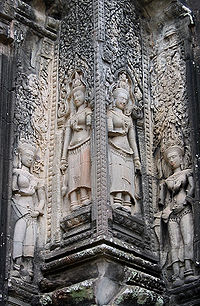 After a long series of wars with neighbouring kingdoms, Angkor was sacked by the Thai and abandoned in 1432 because of ecological failure and infrastructure breakdown. The court moved the Capital to Lovek where the kingdom sought to regain its glory through maritime trade. The attempt was short-lived, however, as continued wars with the Thai and Vietnamese resulted in the loss of more territory and Lovek was conquered in 1594. During the next three centuries, the Khmer kingdom alternated as a vassal state of the Thai and Vietnamese kings, with short-lived periods of relative independence between. 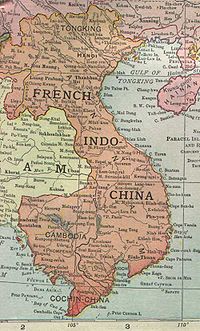 In 1863, King Norodom – who had been installed by Thailand –[24] sought the protection of France from the Thai and Vietnamese, after tensions grew between them. In 1867, the Thai king signed a treaty with France, renouncing suzerainty over Cambodia in exchange for the control of Battambang and Siem Reap provinces which officially became part of Thailand. The provinces were ceded back to Cambodia by a border treaty between France and Thailand in 1906.
Cambodia continued as a protectorate of France from 1863 to 1953, administered as part of the colony of French Indochina, though occupied by the Japanese empire from 1941 to 1945.[25] After King Norodom's death in 1904, France manipulated the choice of king and Sisowath, Norodom's brother, was placed on the throne. The throne became vacant in 1941 with the death of Monivong, Sisowath's son, and France passed over Monivong's son, Monireth, feeling he was too independently minded. Instead, Norodom Sihanouk, a maternal grand-son of king Sisowath, who was eighteen years old at the time, was enthroned. The French thought young Sihanouk would be easy to control.[25] They were wrong, however, and under the reign of King Norodom Sihanouk, Cambodia gained independence from France on November 9, 1953. 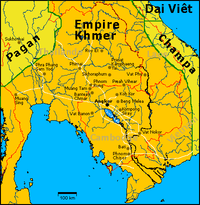 Cambodia became a constitutional monarchy under King Norodom Sihanouk. When French Indochina was given independence, Cambodia lost official control over the Mekong Delta as it was awarded to Vietnam. The area had been controlled by the Vietnamese since 1698 with King Chey Chettha II granting Vietnamese permission to settle in the area decades before.
In 1955, Sihanouk abdicated in favour of his father in order to be elected Prime Minister. Upon his father's death in 1960, Sihanouk again became head of state, taking the title of Prince. As the Vietnam War progressed, Sihanouk adopted an official policy of neutrality in the Cold War although he was widely considered to be sympathetic to the Communist cause. While visiting Beijing, he was ousted in 1970 by a military coup led by Prime Minister General Lon Nol and Prince Sisowath Sirik Matak with the back-up support of the United States. The King urged his followers to help in overthrowing the pro-United States government of Lon Nol, hastening the onset of civil war. Soon the Khmer Rouge rebels began using him to gain support.
Between 1969 and 1973, Republic of Vietnam forces and U.S. forces bombed and briefly invaded Cambodia in an effort to disrupt the Viet Cong and Khmer Rouge. Some two million Cambodians were made refugees by the war and fled to Phnom Penh. Estimates of the number of Cambodians killed during the bombing campaigns vary widely, as do views of the effects of the bombing. The US Seventh Air Force argued that the bombing prevented the fall of Phnom Penh in 1973 by killing 16,000 of 25,500 Khmer Rouge fighters besieging the city. However, journalist William Shawcross and Cambodia specialists Milton Osborne, David P. Chandler and Ben Kiernan argued that the bombing drove peasants to join the Khmer Rouge. Cambodia specialist Craig Etcheson argued that the Khmer Rouge "would have won anyway", even without US intervention driving recruitment although the US secretly played a major role behind the leading cause of the Khmer Rouge.

As the war ended, a draft US AID report observed that the country faced famine in 1975, with 75% of its draft animals destroyed, and that rice planting for the next harvest would have to be done "by the hard labour of seriously malnourished people". The report predicted that
"Without large-scale external food and equipment assistance there will be widespread starvation between now and next February ... Slave labour and starvation rations for half the nation's people (probably heaviest among those who supported the republic) will be a cruel necessity for this year, and general deprivation and suffering will stretch over the next two or three years before Cambodia can get back to rice self-sufficiency".
The Khmer Rouge reached Phnom Penh and took power in 1975. The regime, led by Pol Pot, changed the official name of the country to Democratic Kampuchea. They immediately evacuated the cities and sent the entire population on forced marches to rural work projects. They attempted to rebuild the country's agriculture on the model of the 11th century, discarded Western medicine, and destroyed temples, libraries, and anything considered Western. Over a million Cambodians, out of a total population of 8 million, died from executions, overwork, starvation and disease.
Estimates as to how many people were killed by the Khmer Rouge regime range from approximately one to three million, with two million (or about one-third of the population) being the most commonly cited figure. This era gave rise to the term Killing Fields, and the prison Tuol Sleng became notorious for its history of mass killing. Hundreds of thousands fled across the border into neighbouring Thailand. The regime disproportionately targeted ethnic minority groups. The Cham Muslims suffered serious purges with as much as half of their population exterminated.
In the late 1960s, an estimated 425,000 ethnic Chinese lived in Cambodia, but by 1984, as a result of Khmer Rouge genocide and emigration, only about 61,400 Chinese remained in the country. The professions, such as doctors, lawyers, and teachers, were also targeted. According to Robert D. Kaplan, "eyeglasses were as deadly as the yellow star" as they were seen as a sign of intellectualism.

In November 1978, Vietnamese troops invaded Cambodia. The People's Republic of Kampuchea, a Pro-Soviet state led by the Salvation Front, a group of Cambodian leftists dissatisfied with the Khmer Rouge, was established.
In 1981, three years after the Vietnamese invasion, the country was divided up between a further three factions that the United Nations euphemistically referred to as the Coalition Government of Democratic Kampuchea. This consisted of the Khmer Rouge, a royalist faction led by Sihanouk, and the Khmer People's National Liberation Front. The Khmer Rouge representative to the United Nations, Thiounn Prasith was retained.
Throughout the 1980s the Khmer Rouge, supplied by Thailand, the United States and the United Kingdom continued to control much of the country and attacked territory not under their dominance. These attacks, compounded by total economic sanctions from the United States and its allies, made reconstruction virtually impossible and left the country deeply impoverished.
Peace efforts began in Paris in 1989 under the State of Cambodia, culminating two years later in October 1991 in a comprehensive peace settlement. The United Nations was given a mandate to enforce a ceasefire, and deal with refugees and disarmament known as the United Nations Transitional Authority in Cambodia (UNTAC).

Restoration of the constitutional monarch

In recent years, reconstruction efforts have progressed and led to some political stability under the form of a multiparty democracy under a constitutional monarchy. Norodom Sihanouk was restored as King of Cambodia in 1993.
The stability established following the conflict was shaken in 1997 by a coup d'état, but has otherwise remained in place. Cambodia has been aided by a number of more developed nations like Japan, France, Germany, Canada, Australia, New Zealand, Indonesia, the United States and the United Kingdom.

Thanks for come to visit our websit, we are looking forward to seeing you come back again.